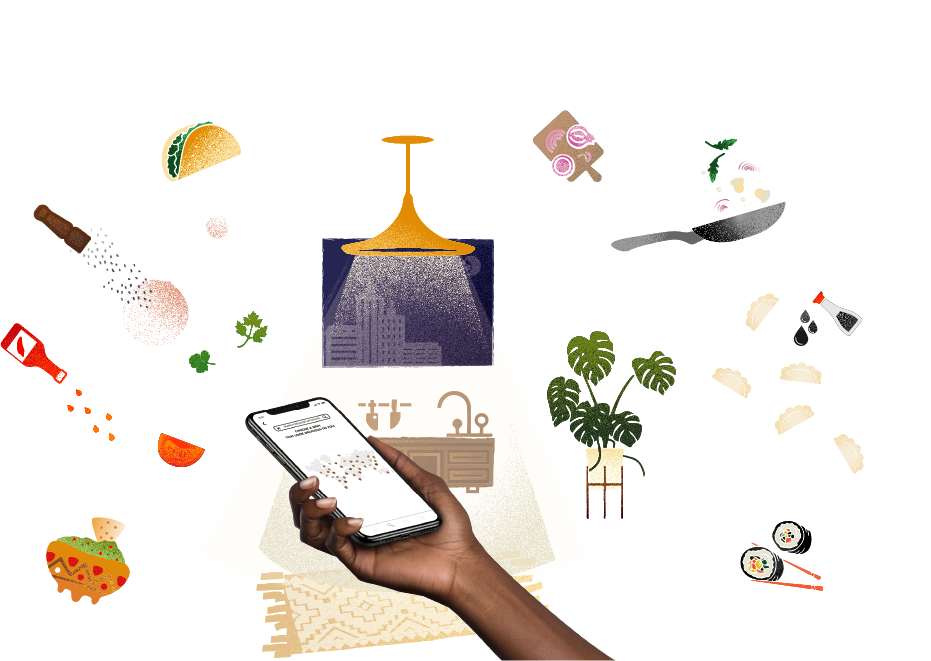 Client
- Home Cooking is a cooking app that offer recipes from all over the world. The goal is to excite user to establish a long term cooking practice but also to learn about other culture though cooking and eating. The app features a meal planning calendar, grocery list generator and recipe suggestions based on user reviews.

User Story 1- " I want to plan my meals."
While the idea of a meal planner calendar isn’t new, the goal of this planner in Home Cooking is to nudge users to inject new recipes into their cooking routines. Doing this in a fun and intuitive way can encourage users to stay on track with their cooking goals.

User Story 2- “ I want to make a meal plan with variety.”
One of the allure of delivery apps is access to cuisines from all over the world. Through user research, I found out most people assume their go- to dish is very hard to make, and struggles with meal redundancy, my goal is to inspire user to cross that threshold and attempt to make that dish and introduce that dish into their recipe rotation. My solution is an end of day recipe review prompt that generate recommendations for similar dishes based on regions.

User Story 3- " I want to plan a detailed grocery list."
The shopping list adjusts ingredient amount based on recipe portion size that user can easily edit. Ingredient substitution allows user flexibility and removes a mental roadblocks to cooking a new dish. It also provide photos of each ingredient for easy shopping identification in store.

I did a high level brainstorming session to create a general roadmap for Home Cooking. The 3 keypoints i took away is the below..
• How might we establish inspire user to establish long term cooking practice?
• How might we expand user’s palate ?
• How might we facilitate user’s curiosity for other culture through cooking ? 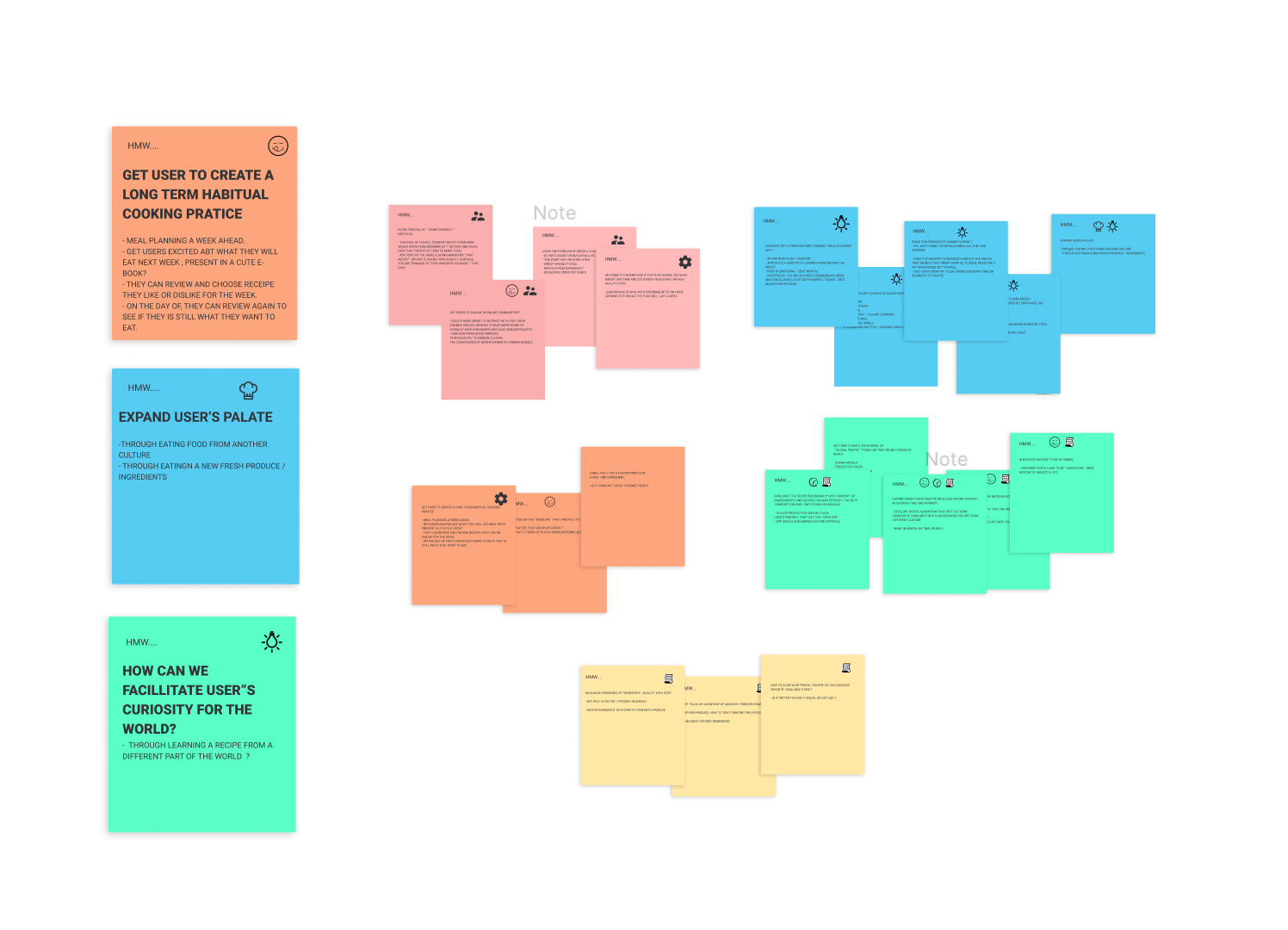 I created a Google Survey to research on potential users for Home Cooking. I recruited a pool of people who lives in NYC and who express interest in cooking. There were 20 survey participants. This is generally a highly educated and medium to high income group. The most interesting piece of data is most speaks at least 2 languages, which suggests this is a culturally diverse group.

I interviewed 5 people from the same group of people who participated in user demographic surveys, I asked them questions regarding their general cooking habits and lifestyles.

I looked at the top three meal planning apps on Apple Store, each has their own strength and weakness. 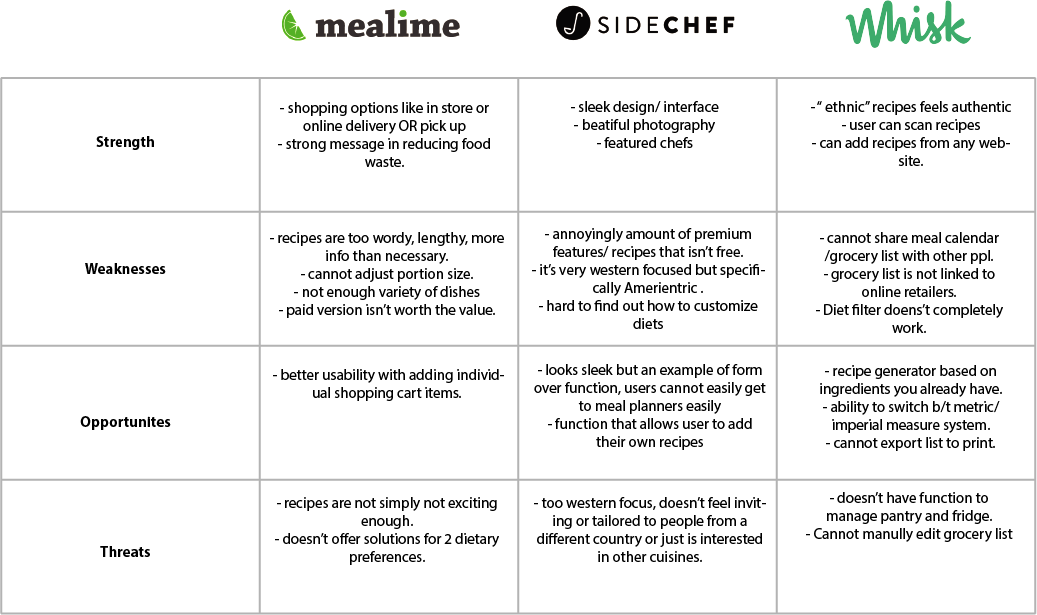 Through interviewing the core target demographic, I discovered there are 2 major types of users. There are type A -The Meal Planners vs Type B- The Non- Meal Planners. Each type of user presents its own unique challenges/ pain points.

Type A-Meal planners, they do plan their weekly meals, usually on the weekends, and they are usually set on cooking consistently throughout the week. However, at the midweek point they do get tired of the recipes they made and crave their usual delivery order. 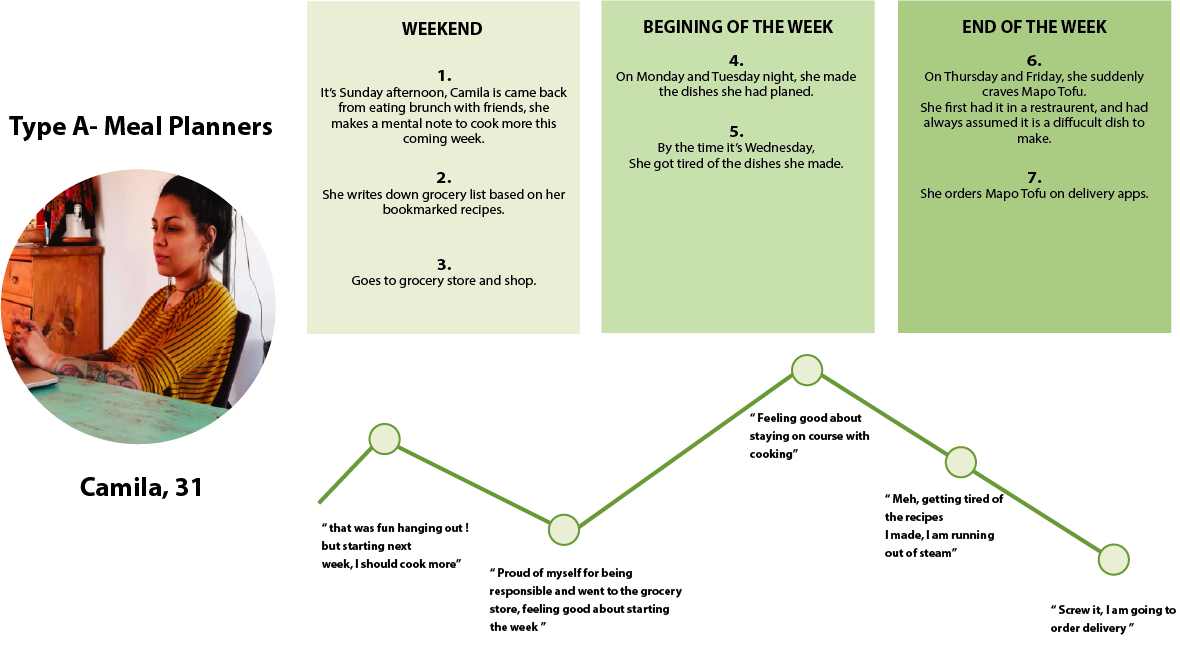 Type B- Meal plannerthey usually do not plan their meals, they feel guilty about constantly ordering on delivery apps. During the week, they make sporadic runs to the grocery store, they end up purchasing not enough ingredients or ingredients they don’t necessarily need for healthy eating. As result, a couple days after their grocery run, they fall back on ordering deliveries again. 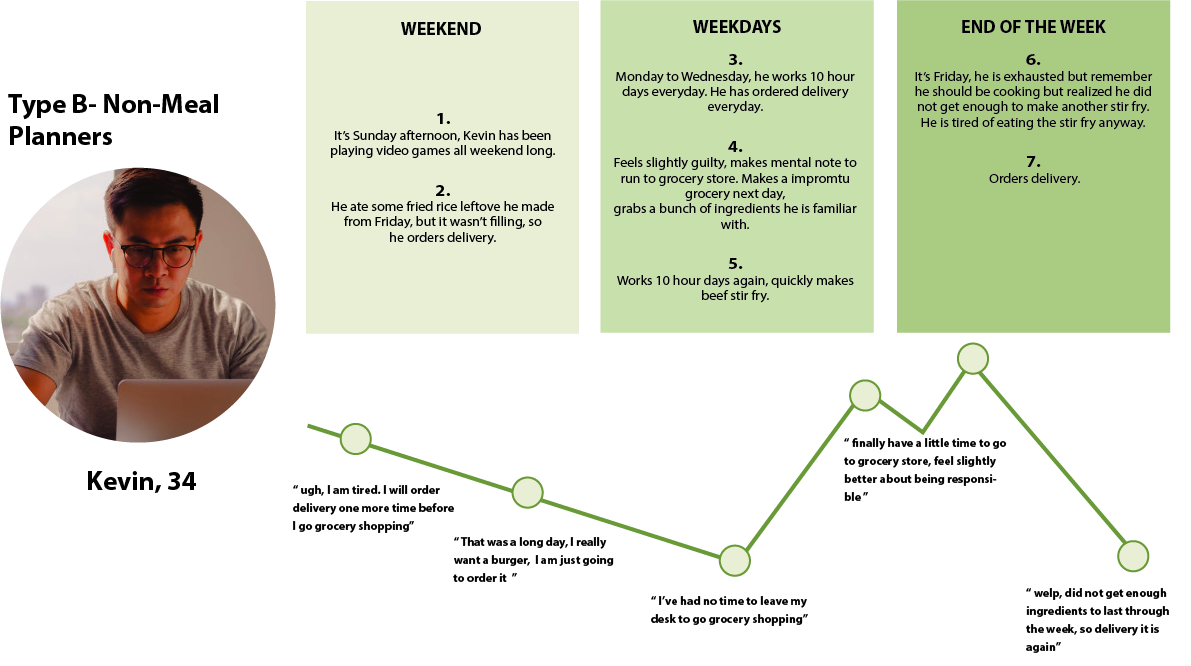 Through creating the personas, I was able to formulate a series of user stories. There were stories like being able to “ manage the content of the freezer and pantry more efficiently, or wanting “ to cook with seasonal ingredients”. I prioritized the top three that would facilitate cooking on a day to day basis.

Given limited time and resource, i wanted to focus on the immediate day to day problems, which is how to help user plan their meals effectively, excitingly, so they can avoid the delivery apps. The tertiary problems like produce, pantry management, and the community building aspect gets put on the back burner.

User Story 2- I want to " make a meal plan with enough variety."

I moved onto creating a site map that would serve as a map of how each user flow would relate to each other on the platform. 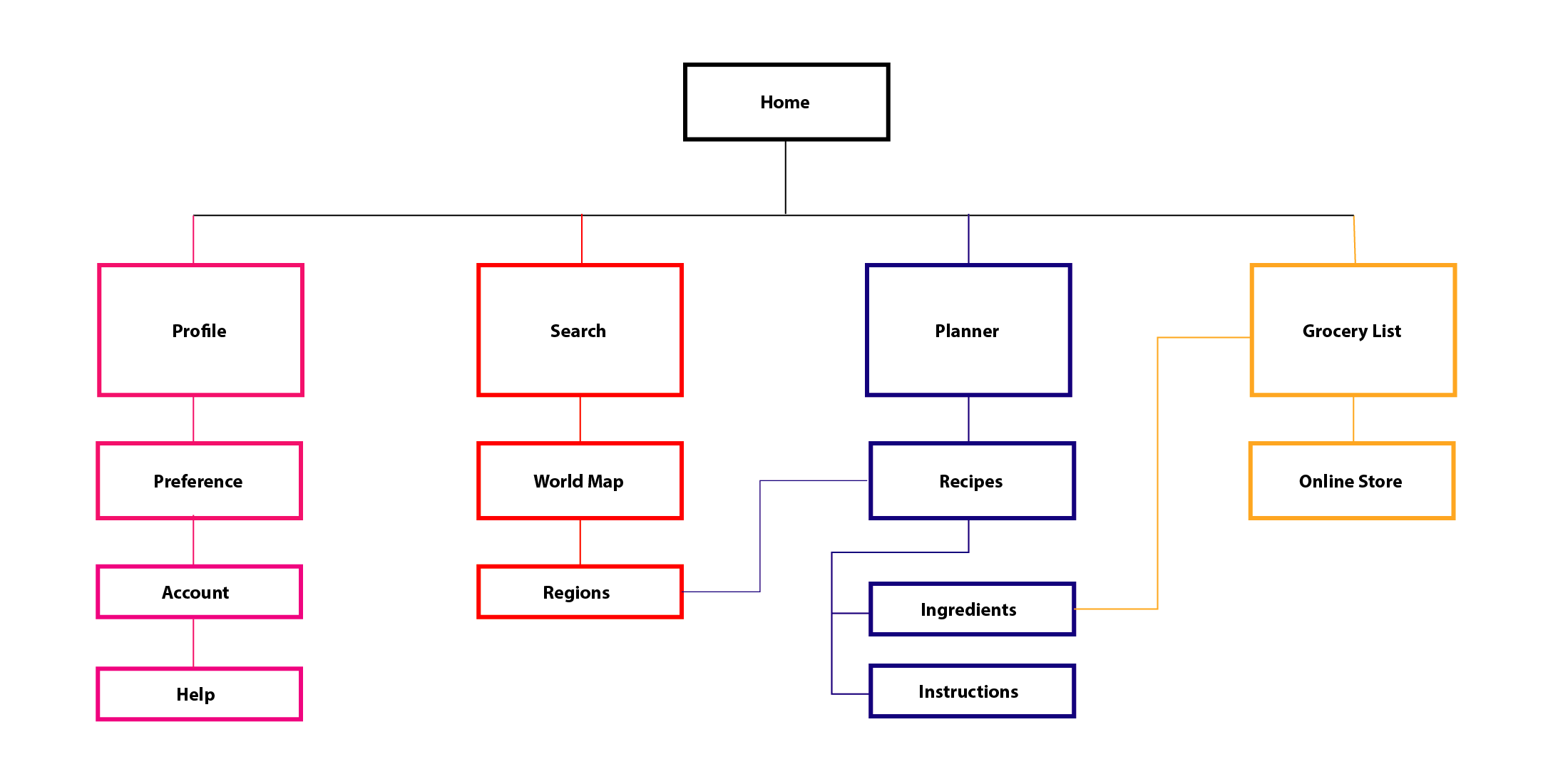 This shows an instance of how a Type A user like Camilla would interact with Home Cooking. Let's say her go to favorite dish is Mapo Tofu, this app would encourage her to try it since she already shopped for the ingredients. 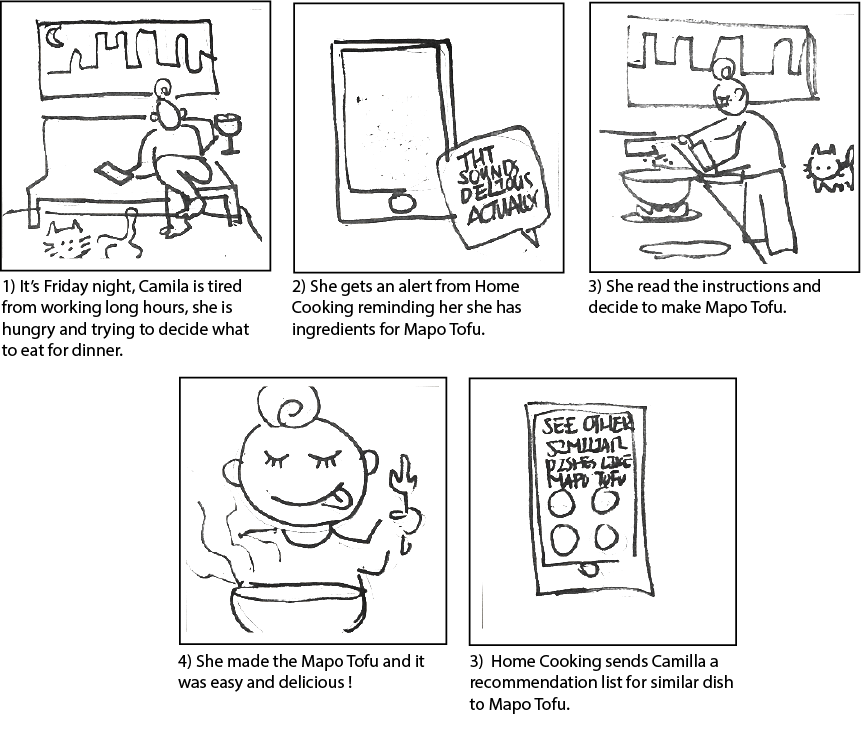 Taking the information architecture I built for the site map, I did some crazy 8 sketches to spit out as many different ideas as possible to explore divergent paths. 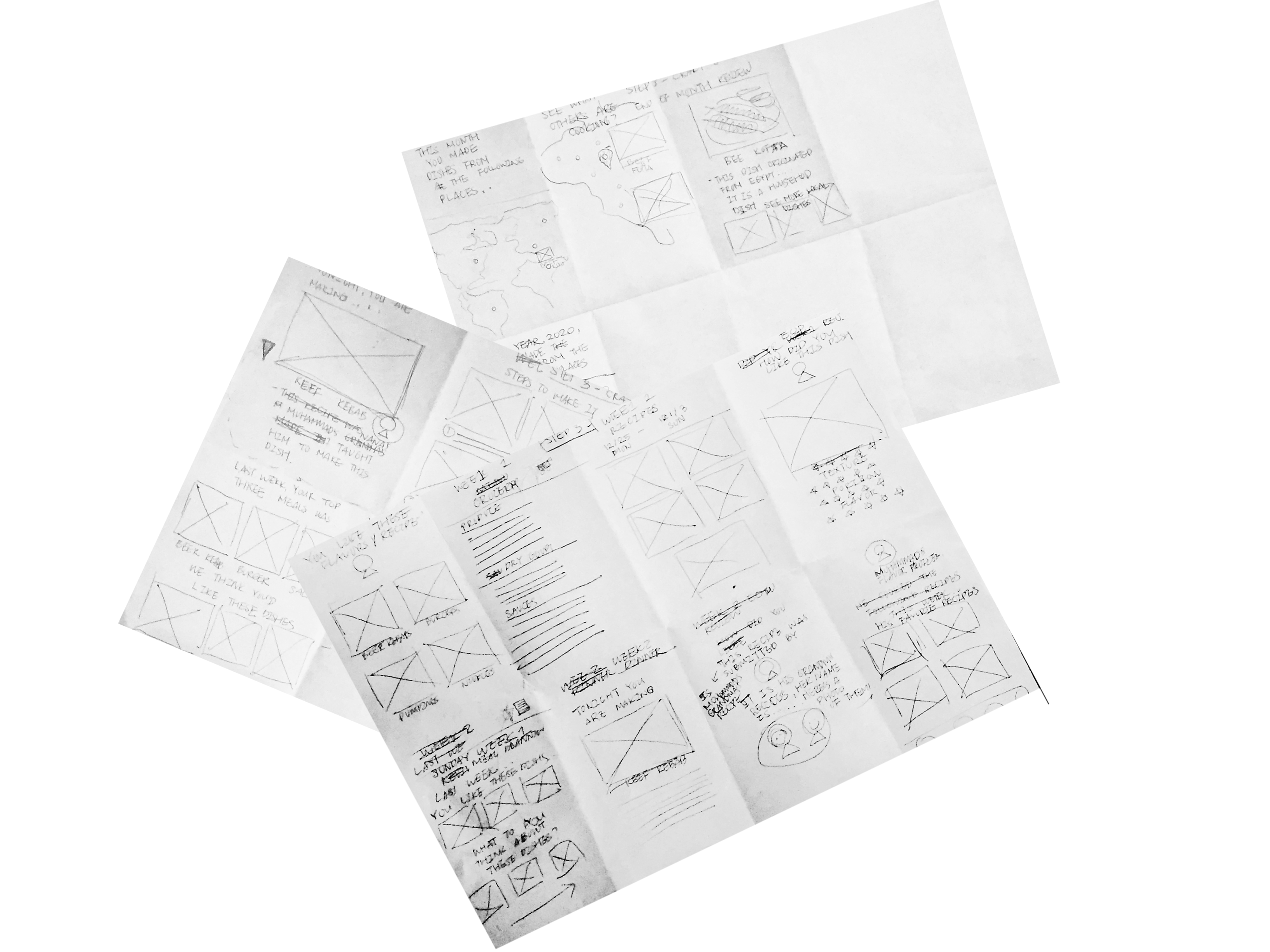 • In the earlier iterations like version 1 and 2, I had designed a long, 3 step intake questionnaire to gauge user’s cooking/ eating/ and flavor preferences to create an tailored experience for consumers, I had tested it on a small group of people, the feedback was unanimously that it was simple too long of a onboarding process and user will lose interest.
• Through user testing, i found out the wording/ icons on some of the questions were confusing, and some questions are simply not applicable to them. So where i landed is the 2 screens you see on the right, users would only need to go through 2 simple questions before they can get to the world recipe page and start to plan their meals.

Earlier Stages
• Shift away from a more realistic representation of the world map.

• I decided to shift away from the realistic depiction of the world map because through user testing, I found out users are less concerned about the exact location of an recipe’s place of origin, they just want to get a general idea of of where the recipe is from.
• The result is a cleaner and stylized world recipe map, then through another round of user testing, I decided to add the options of being able to view the same info in recipe vs list form, that again was a insight through user testing.

Like I mentioned earlier, i did 5 rounds of iteration. the most formative interview was done on version 4, which was the last iteration i did before version 5/ final prototype. Through this feedback capture grid, i was able to move forward and finesse the final prototype for Home Cooking. 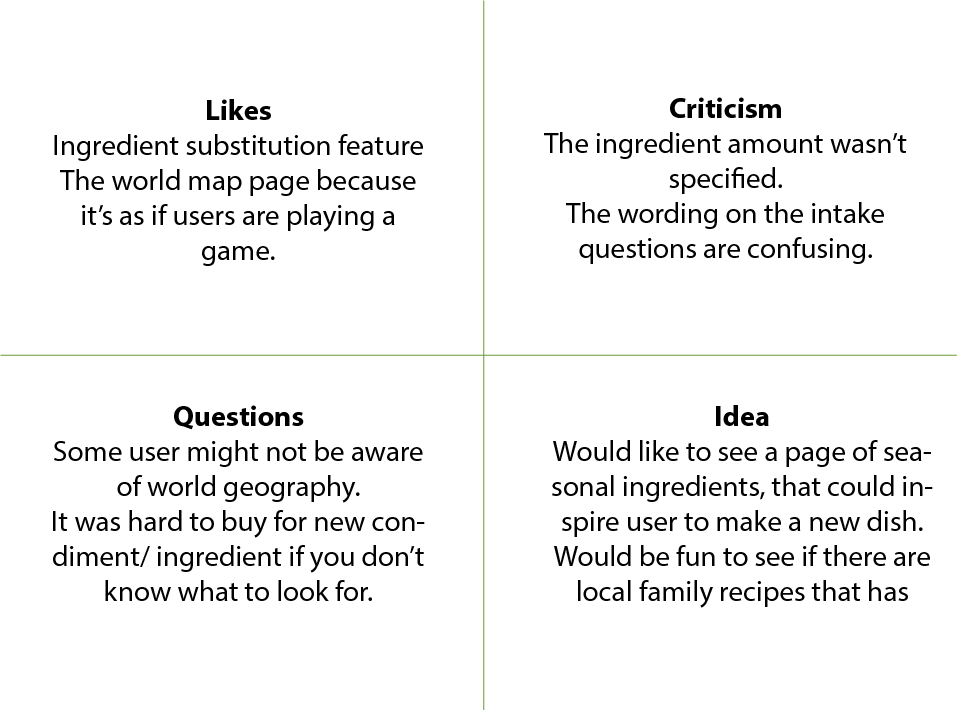 I performed a A/B test on one of the most important feature of Home Cooking, which is the meal planner calendar screen. In this test, i wanted to find out which one of these screens help user plan their meals more efficiently. This test was performed through Google Survey with participants of 10 people. 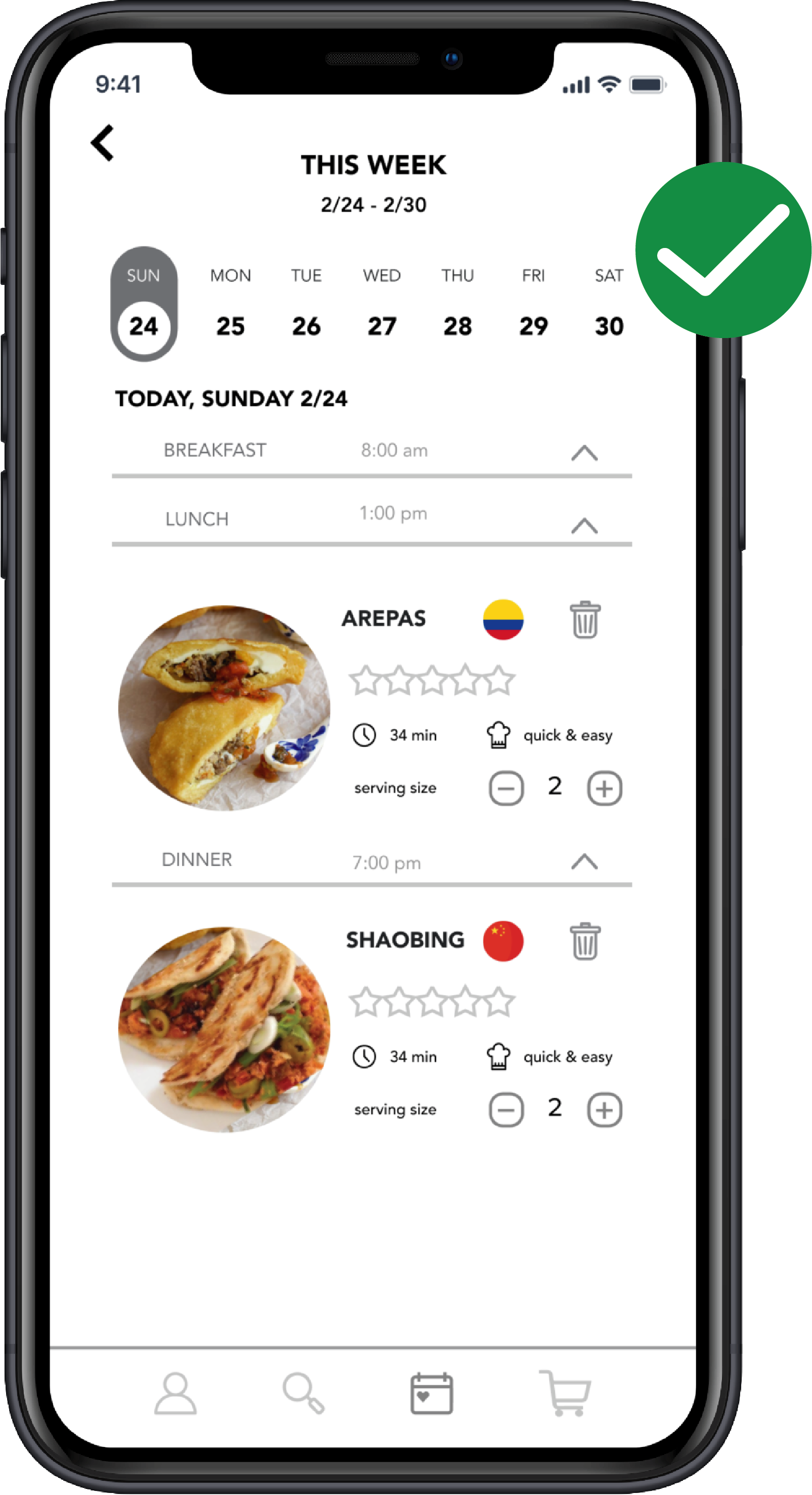 89 %  of user sprefer this version because the days are collapsible and it offers easy navigation. 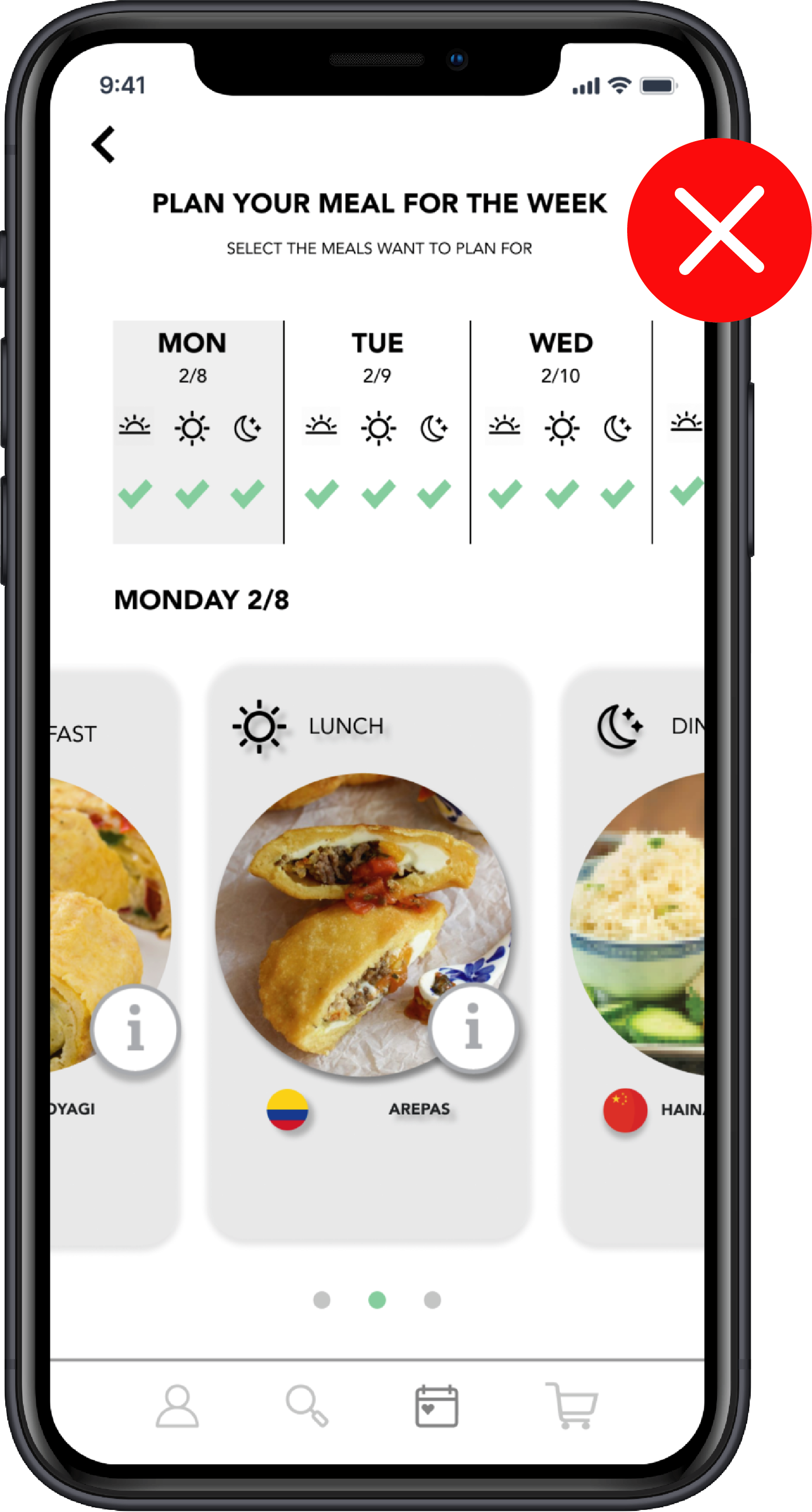 While this version allow for bigger photos, it was confusingfor users to navigate.

I conducted google polling survey, with participant of 8 participants. On a scale of 1-5, 1 being the lowest, 5 being the highest. I asked them to rate this app on a series on criteria like “ how easy was it to make a meal plan” and perhaps the most important question of them all is “ how likely are you to use this app to establish a long term cooking habit” and it was a 4.2. 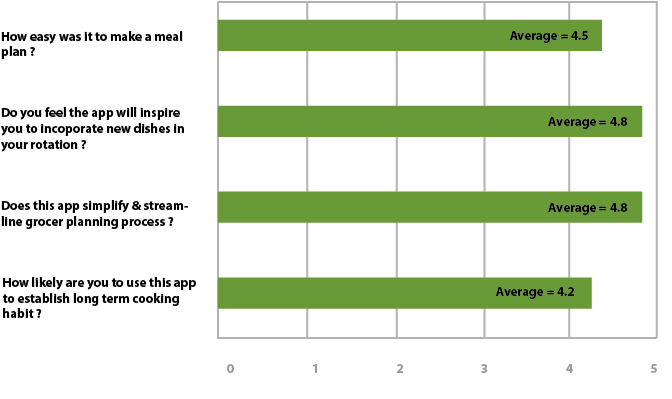 Fridge Management
• Recipe generator based on ingredients on hand.
• A log that tracks ingredients in the fridge & pantry.

Bridge Across Cultures
• Quarterly progress pop up that show user all the dishes from the world they made.
• Get user to share family recipes and stories

Globally Minded
• Tech can divide or unite us. Learning and appreciating other culture can be a way to bridge our differences, Home Cooking hope to do that through cooking.

Kinder Approach to Health
• Cooking can not only utilitarian in purpose but it can be a way to stay connected to the world by knowing and learning what you are putting in your body.

Legacy & Heritage
• Recipes are accumulation of culture and history. Passing down and sharing recipes can be a way of celebrating your family’s legacy.