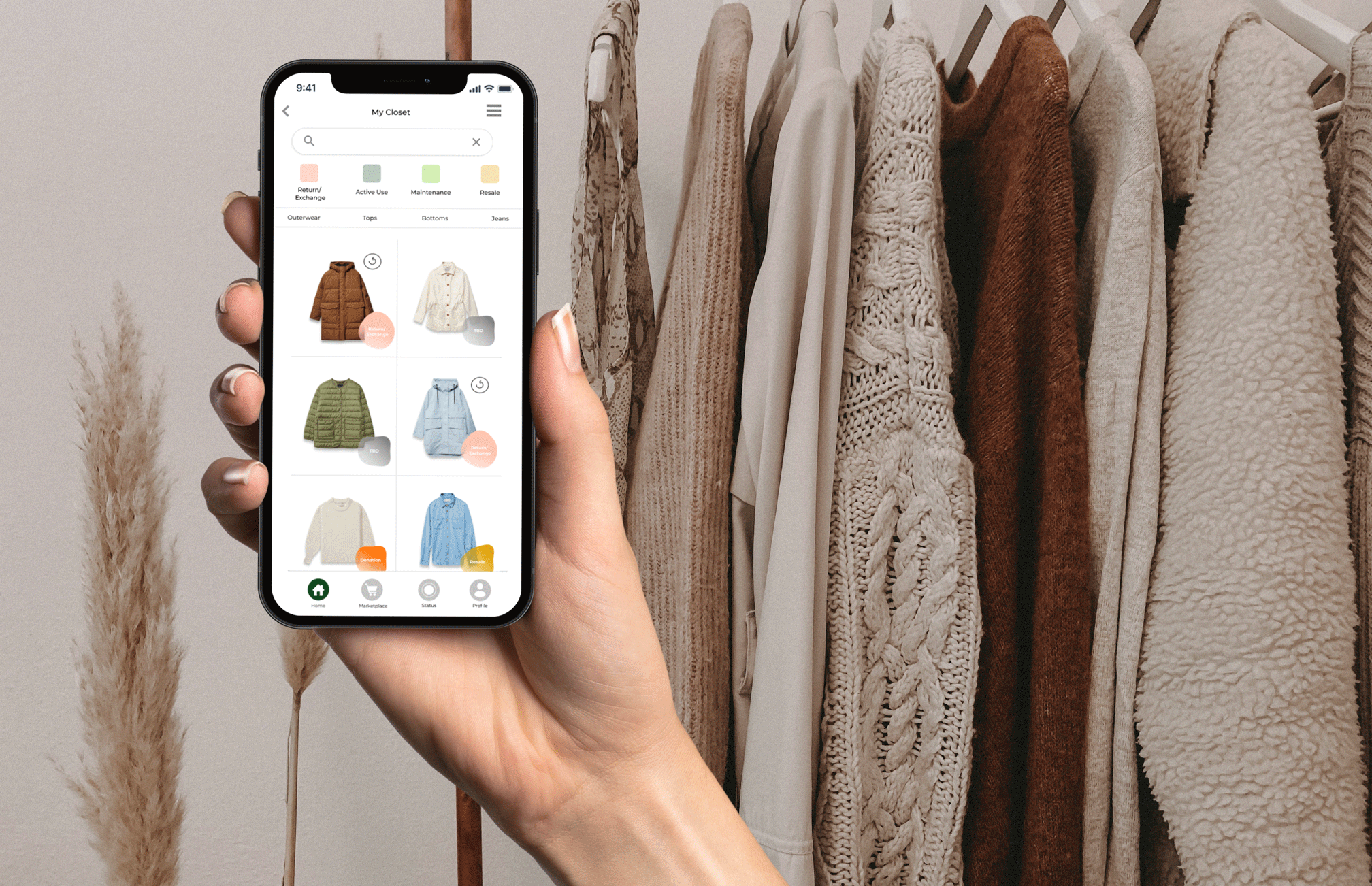 User Story 1- " As a consumer, I want to be routinely reminded to return/ exchange my items."

User Story 2- “ As a consumer, I want to routinely perform maintenance on my items."

User Story 4- "As a consumer, I want to routinely donate items I don’t wear.

- secondly, I created a survey, with 20 participants, to weed out people who doesn’t care about fashion and therefore least likely to have the clothing piling problem.
-I also made sure to talk to people who has disposable income, so they have wiggle room to spend on clothe monthly. 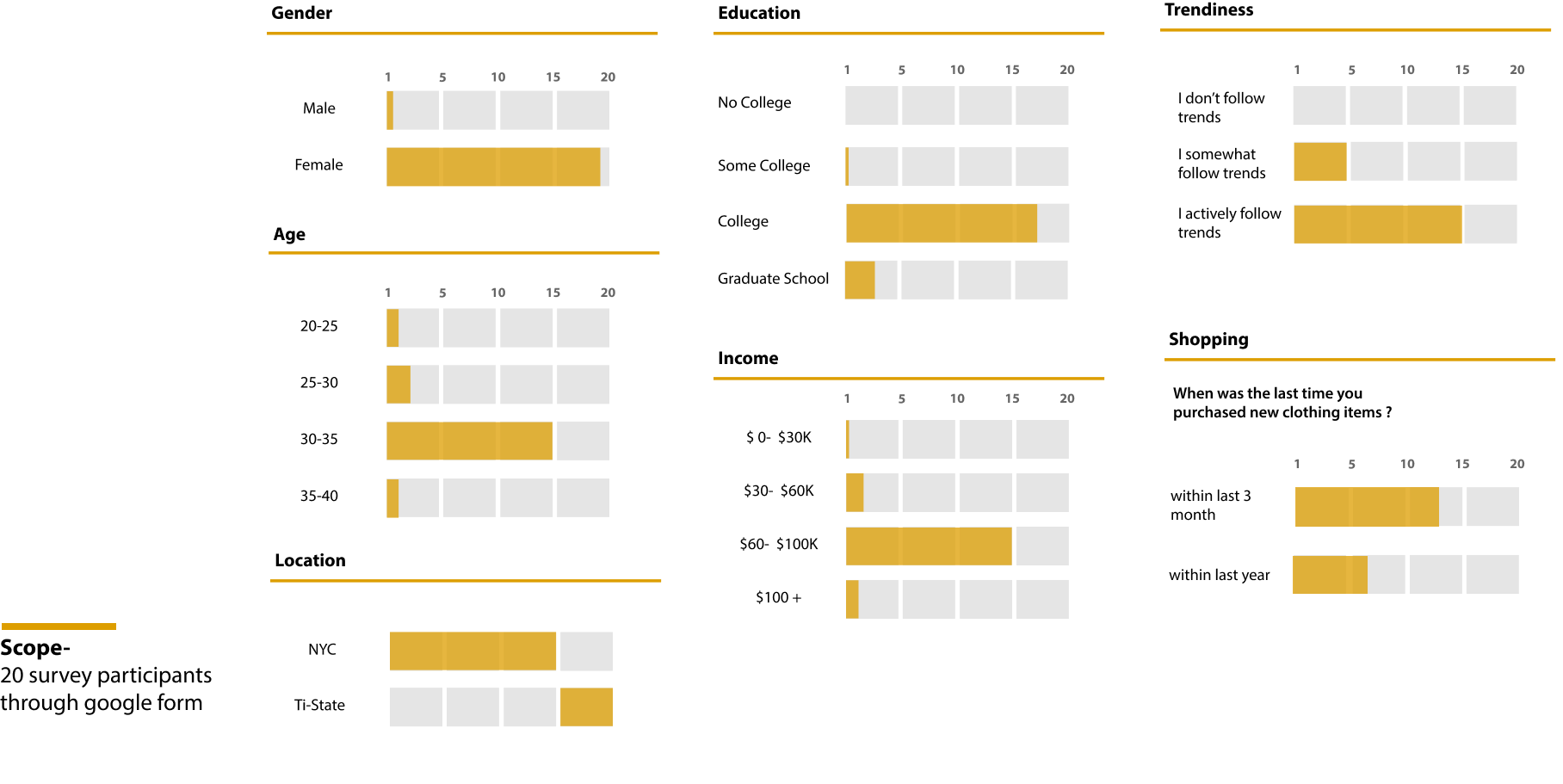 - I spoke the 10 participant who had purchased new item in the last 3 months.
ask them some general questions about their shopping habit and how they manage their clothes/ closet
- I found out through this surveys that users who actively manage their closet, they usually do occasionally re-selling app. However, most people do not have a habit of managing their closet. 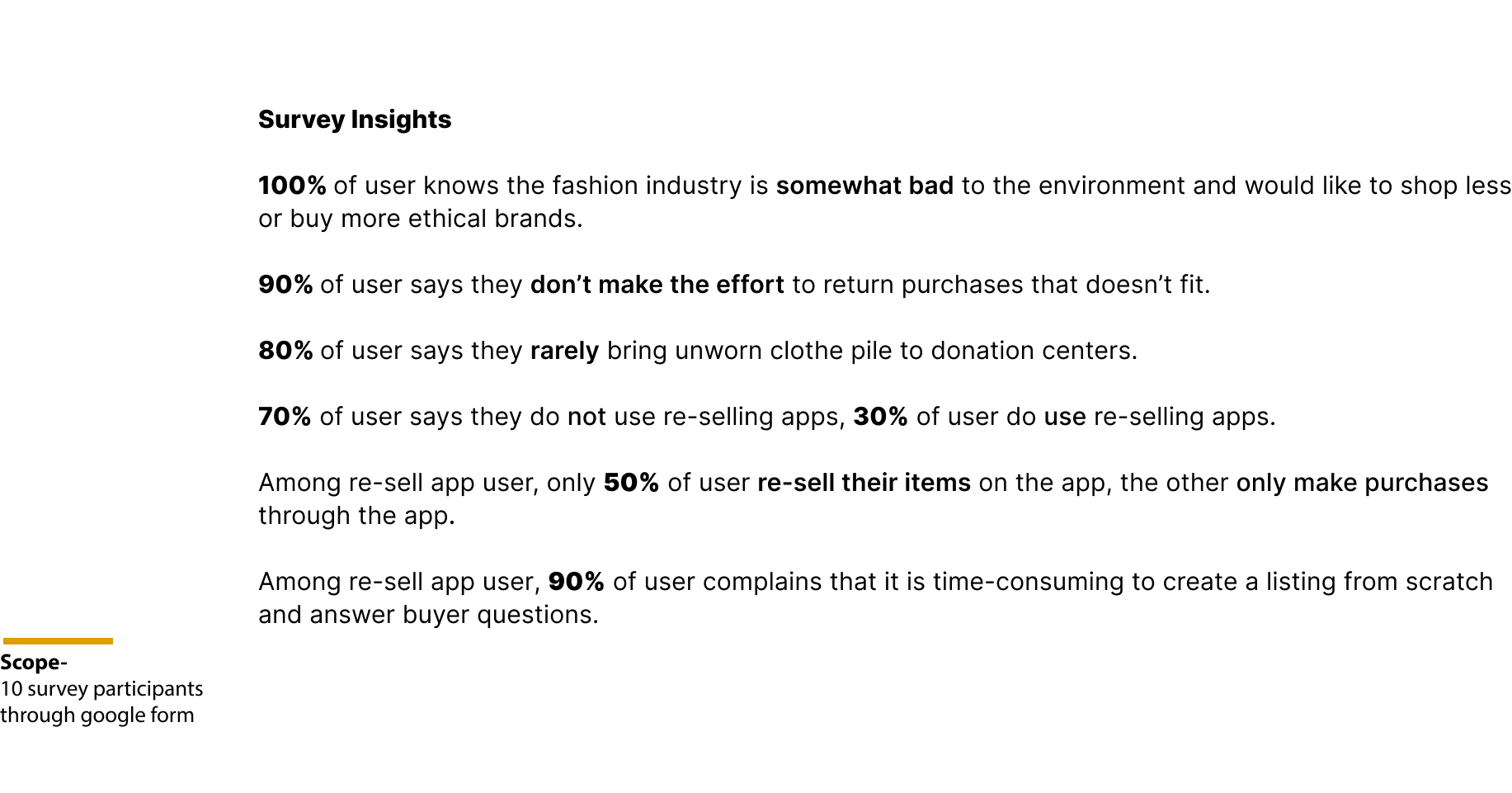 There currently isn’t a product that does exactly the same thing as Stuff does, where it takes the user through a complete cycle of a item’s lifespan.
there is however, resale apps, where is one of the many features within the app, so that is what i did my competitive analysis on. 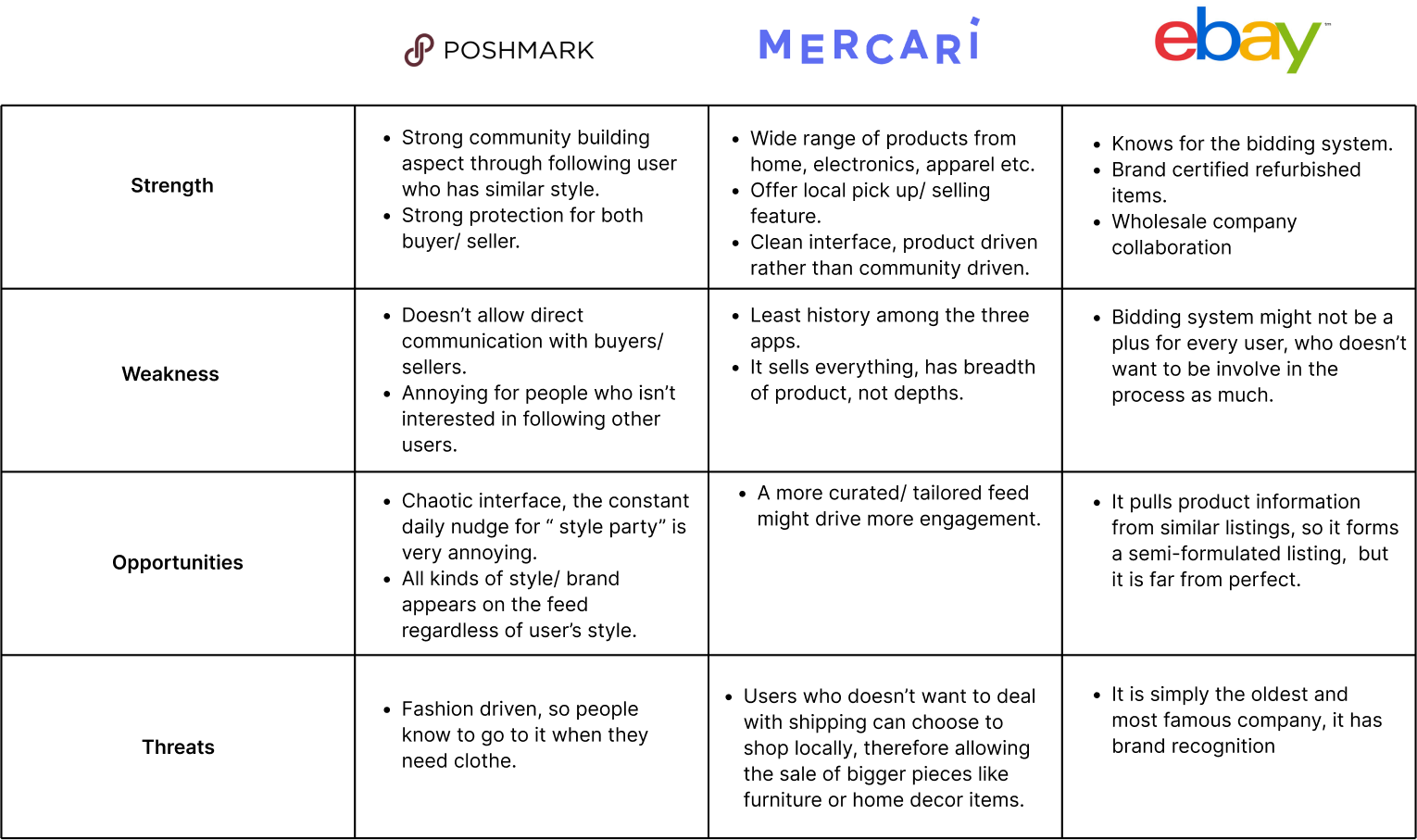 - I spoke to 3 participant out of the 10 participant
- I ask each participant to walk me though their closet management habit, if there are any. It is during the interview process, patterns became to emerge...
- The key to prevent accumulation is to regularly manage your closet, and there are 4 major aspect to managing their closet and prevent clothes accumulation. Which is to constantly re-sell, returning, maintain and donate. 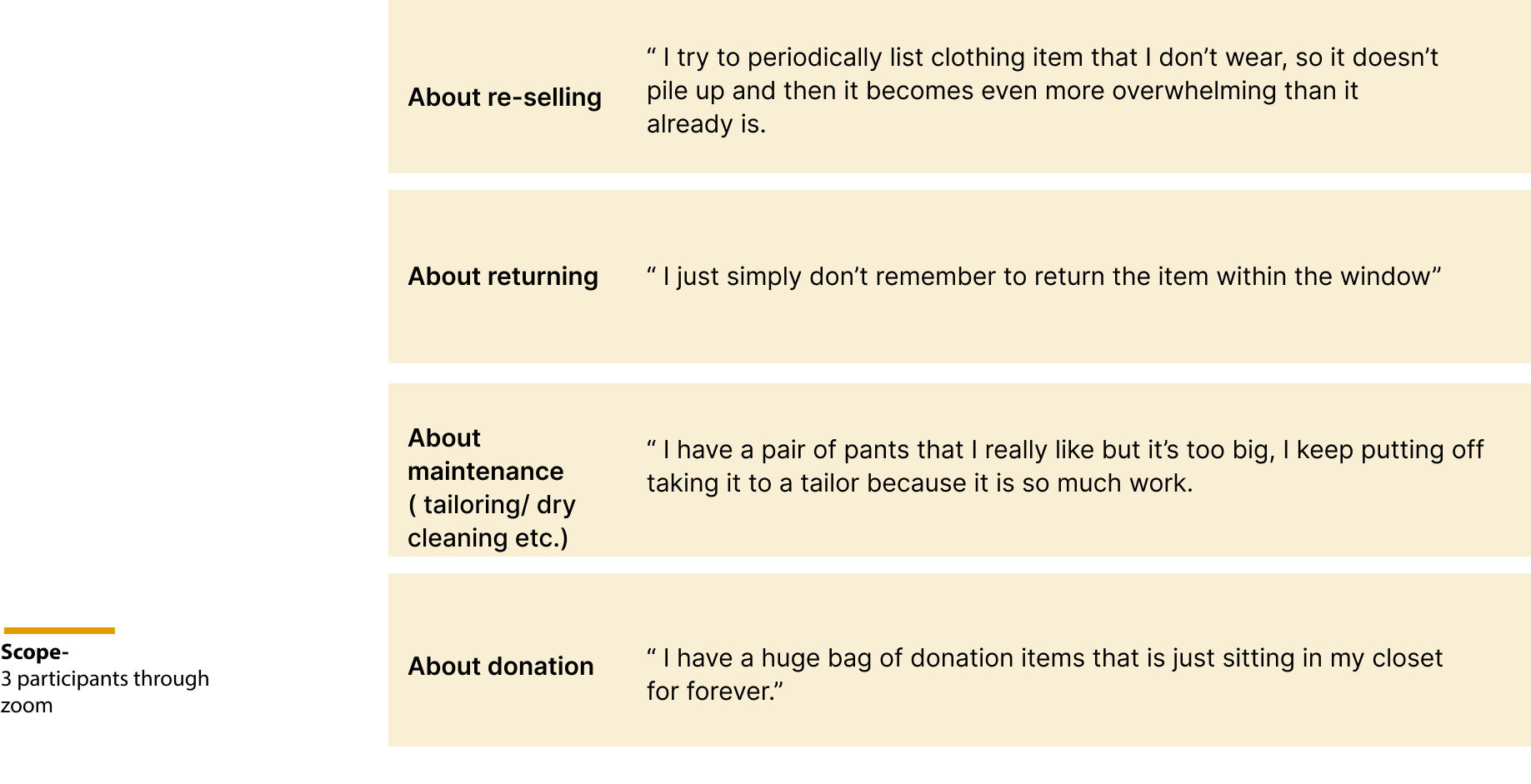 In further visualizing the solution, I took the user research from the discovery stage and formulated into 2 types of personas.

Type A-Meal planners, they do plan their weekly meals, usually on the weekends, and they are usually set on cooking consistently throughout the week. However, at the midweek point they do get tired of the recipes they made and crave their usual delivery order. 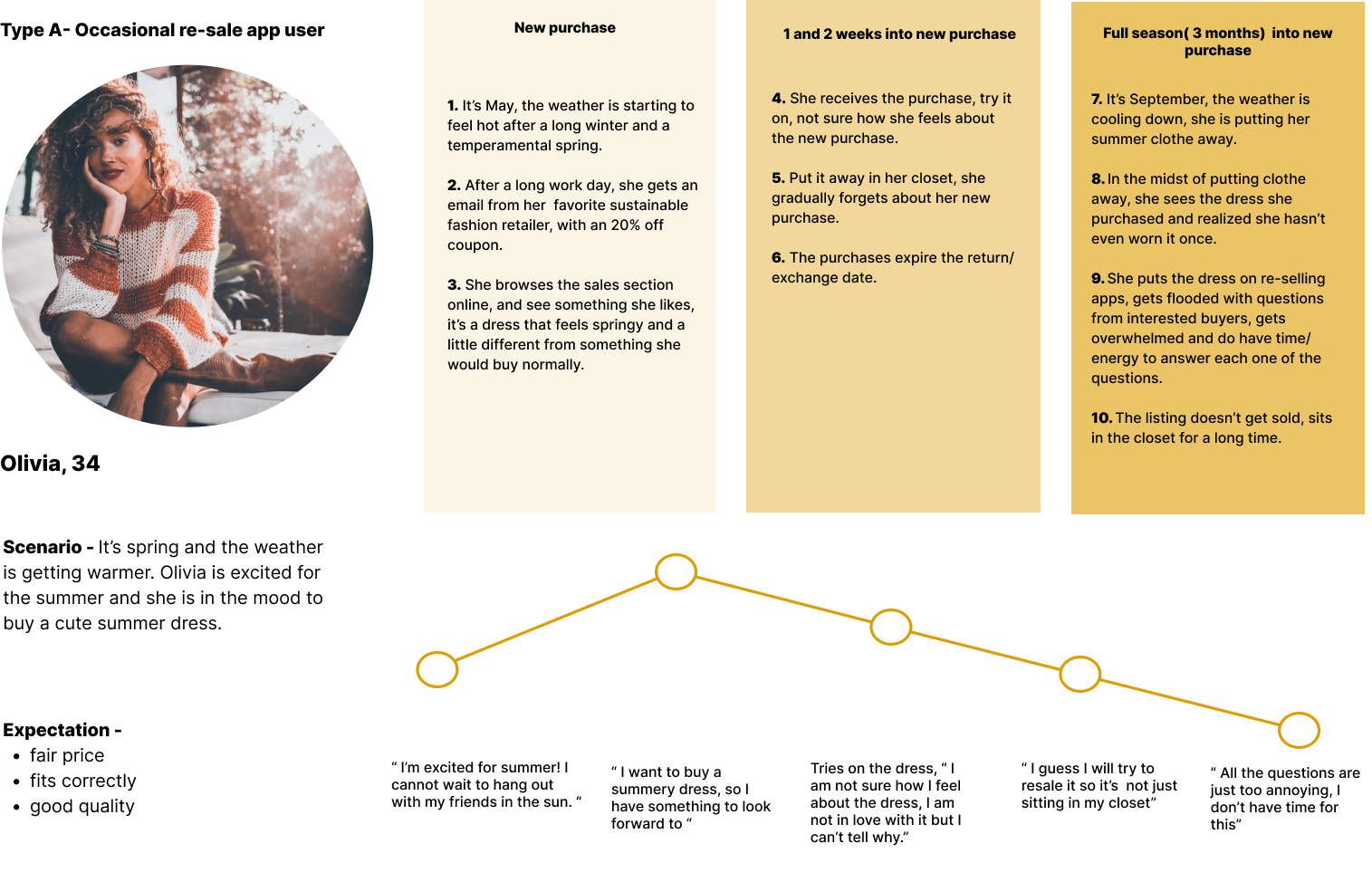 Type B- Meal planner they usually do not plan their meals, they feel guilty about constantly ordering on delivery apps. During the week, they make sporadic runs to the grocery store, they end up purchasing not enough ingredients or ingredients they don’t necessarily need for healthy eating. As result, a couple days after their grocery run, they fall back on ordering deliveries again. 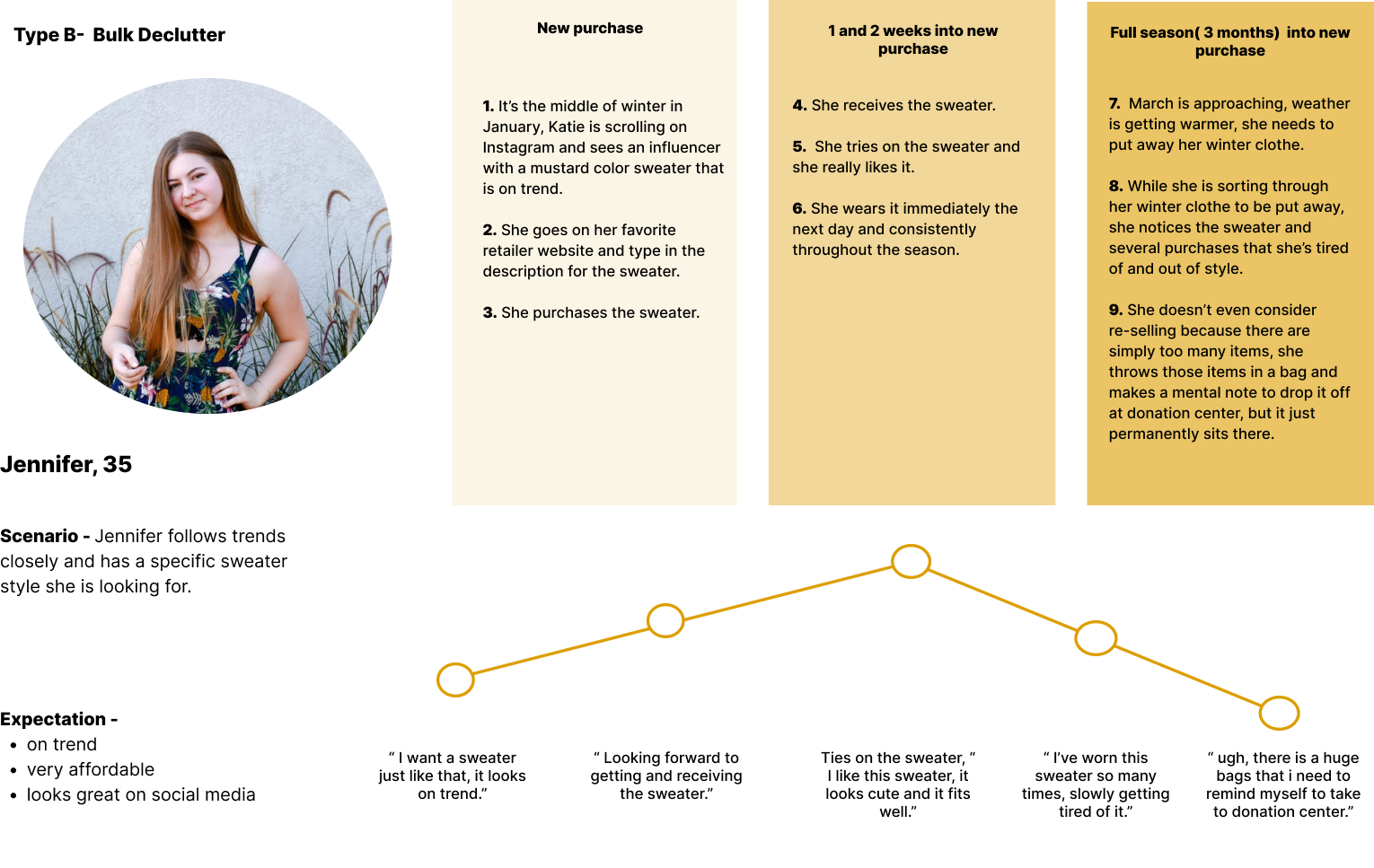 From user interviews, i know it’s very important to routinely and periodically manage your clothes to prevent the clothe accumulation.  So I prioritize user stories that would facilitate that process specifically. Which includes return, maintenance, resale and donate.

User story 4 - I want to buy from brands that has suitable sizing for my body type.
User story 5 - I want to see new outfit suggestions so I don’t only wear 20% of of closet.

Given limited time and resource, i wanted to focus on the immediate day to day problems, which is how to help user plan their meals effectively, excitingly, so they can avoid the delivery apps. The tertiary problems like produce, pantry management, and the community building aspect gets put on the back burner. 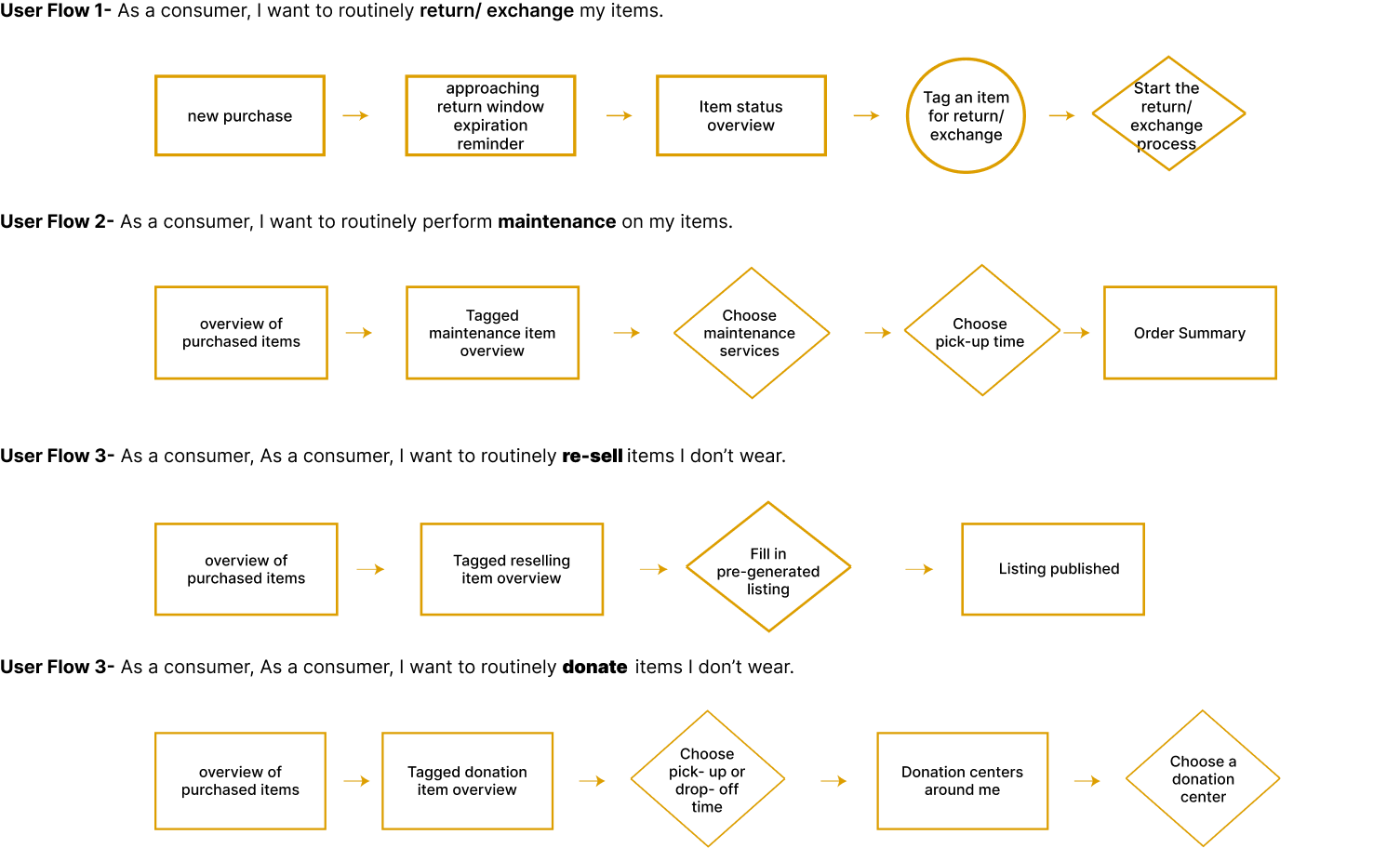 I moved onto creating a site map that would serve as a map of how each user flow would relate to each other on the platform.

- From user research, I know users usually based their behavior on seasons, so that is what I based my inspiration on; spring, summer, fall, winter. I pulled the colors off the board accordingly.
- Moving onto visual identity, for typography, I wanted to choose a font in the humanist tradition, fonts in that family mimics the effect of a hand written calligraphy, which makes gives it that classic and nostalgia vibe.
- They usually have a a high line weight contrast, which tends to make a easy viewing experience even on a smaller screen. 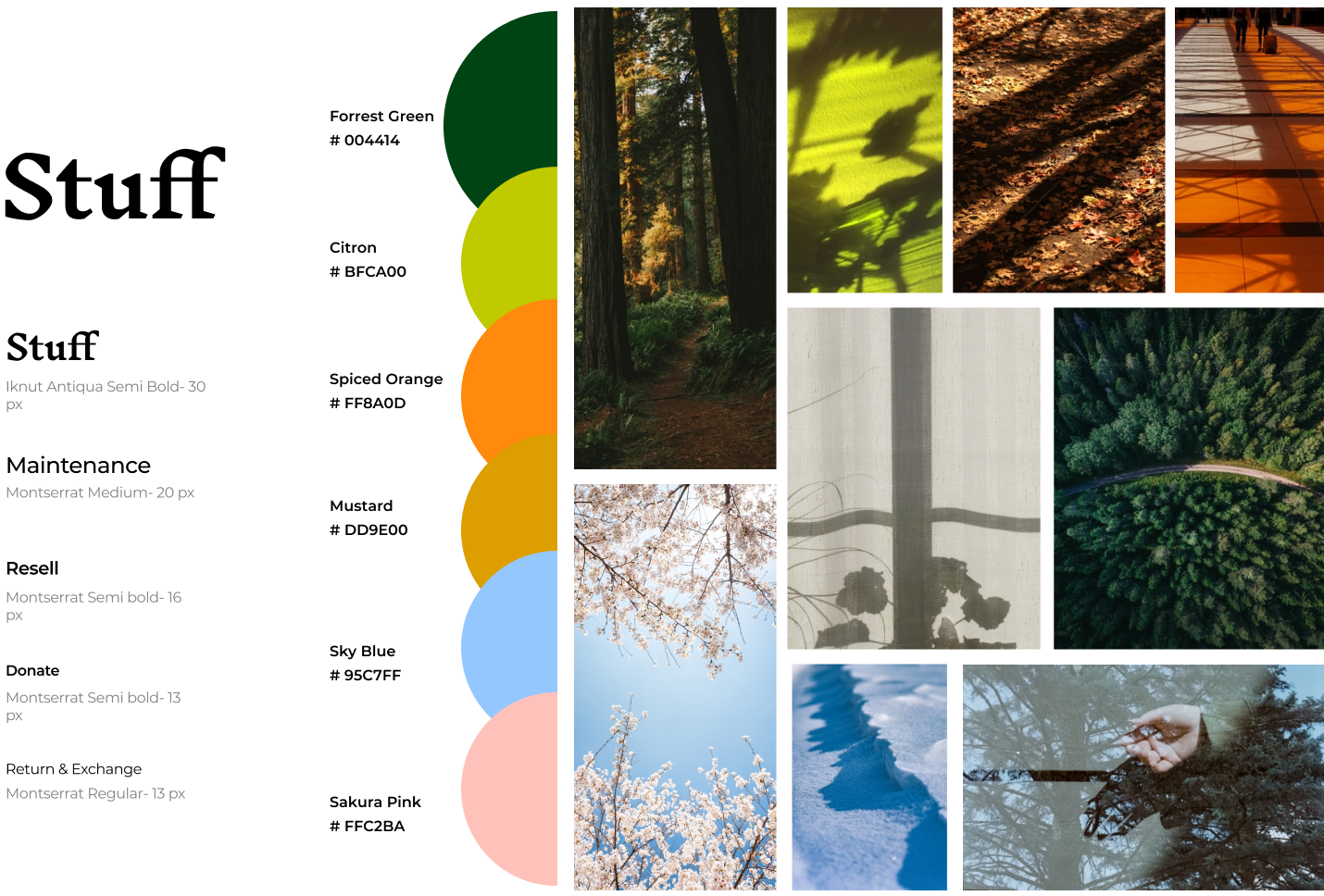 Here are the some brainstorming sketches I did for the virtual closet and tagging process. 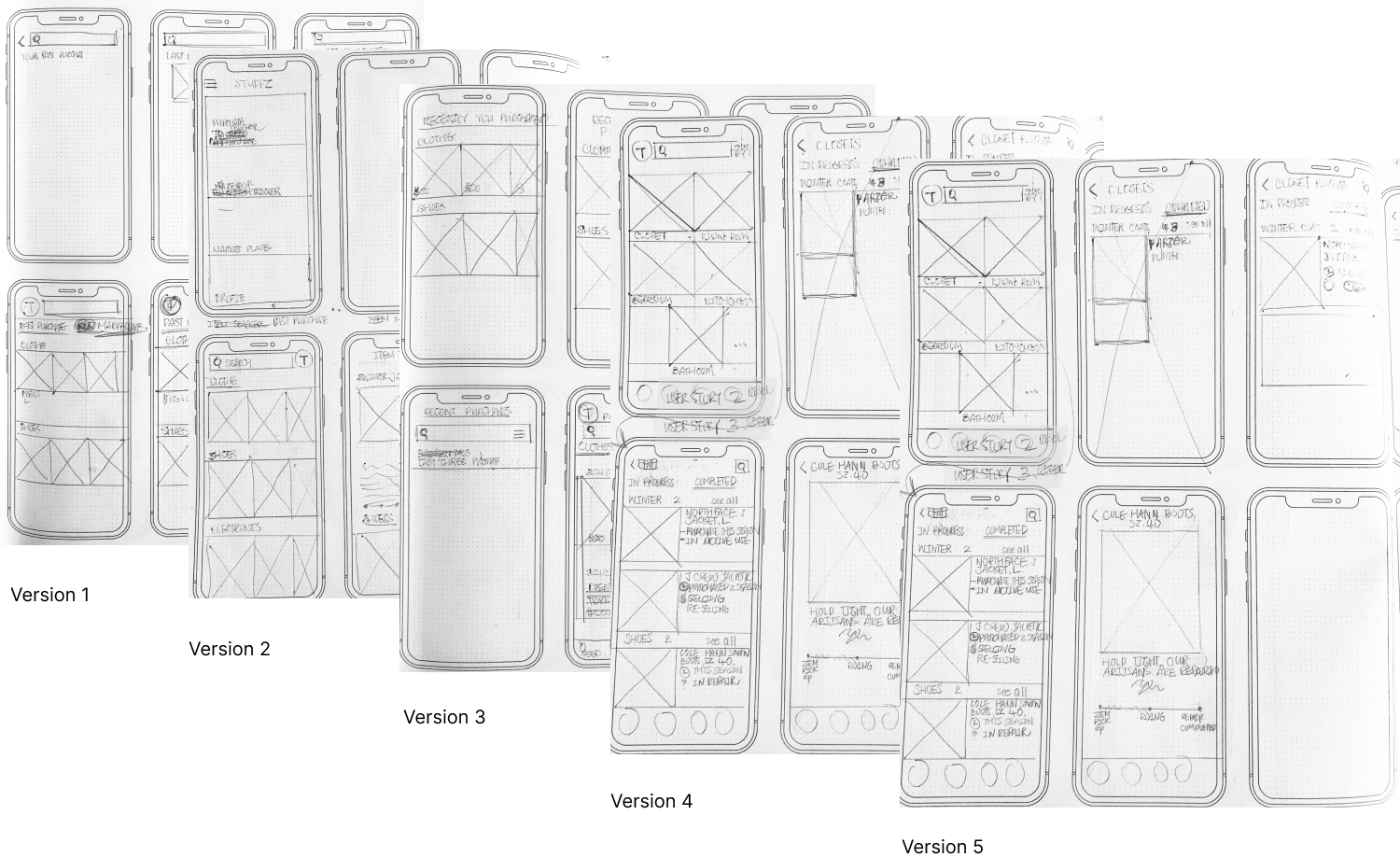 - Earlier wireframe iteration contain details like date purchased, brand names, timelines from item purchased, item received and amount of wear.
- Through user click test, I found out that users don’t necessarily care about all the item details if their end goal if to simply tag an item for maintenance, resell or donate.
- As the visuals gets nail down and I gradually developed the mood board, the layouts were changed to reflect a minimal and simplistic aesthetic.
- User feedback- one user reflected she would want to immediately see which items are still within return window.
- For the final version, I had change the status icon from circles to squares. Circle read as radio buttons ( single choice ) vs Checkboxes indicate to multiple choice is available and it also serve as filters. 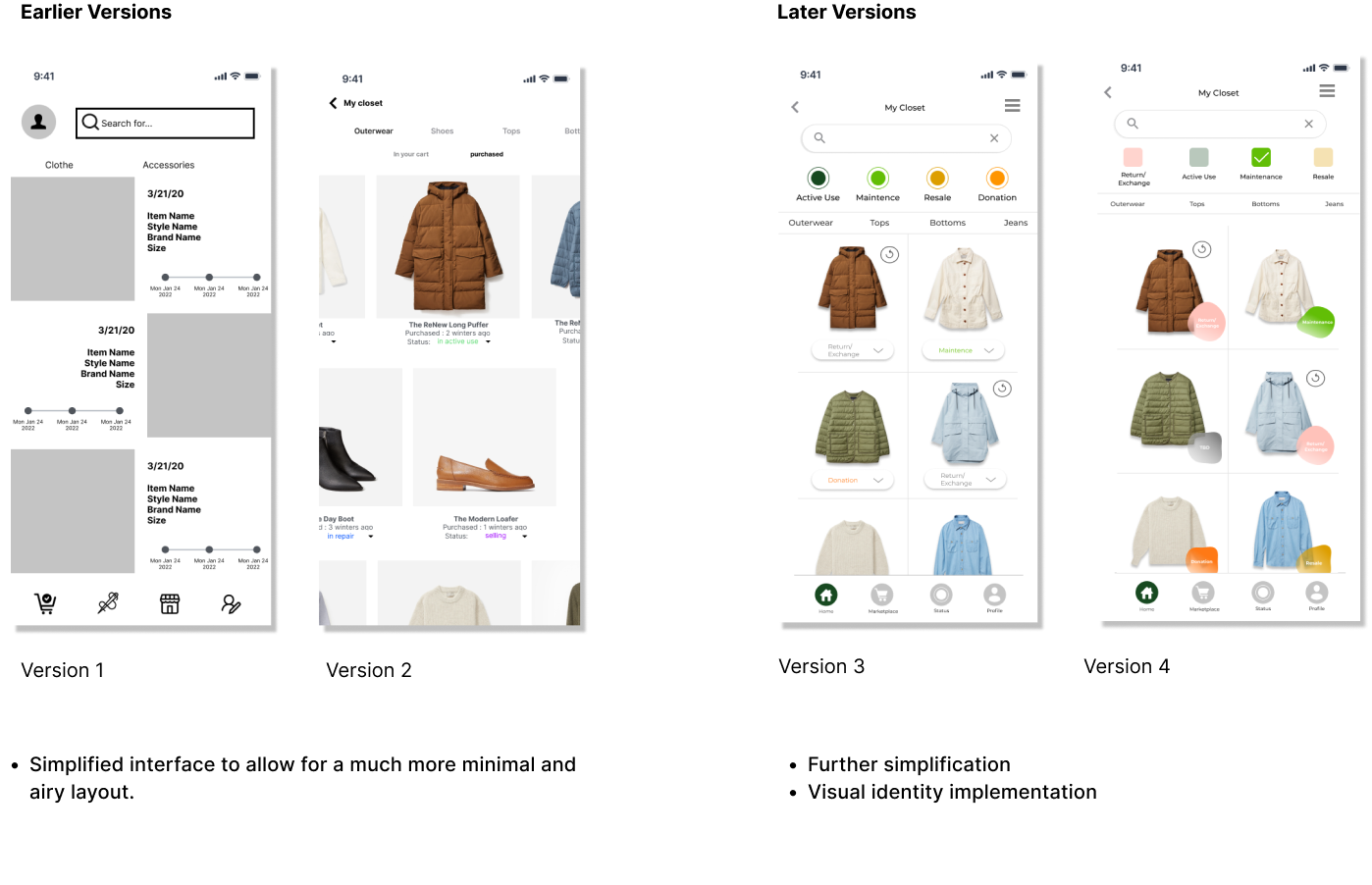 - Earlier wireframe iteration only contain a written description of the items user is donating, through user click tests, user reflected that she would want to see which items she is donating.
- As the project approach final stages, the visuals identity were implemented as background images and colors.
- So a previous feedback from the virtual closet was user don’t need to see production information details when they are tagging, however, they would want to this information eventually, so I had move the information here.
- icons in navigation bars were also simplified and placed on grey background, active state would turn to the primary green color .
- Drop down menu selection were taken out, because it was somewhat redundant as the text underneath the radio buttons above. They were changed to a simple and elegant color system that correspond to the color key square as above. 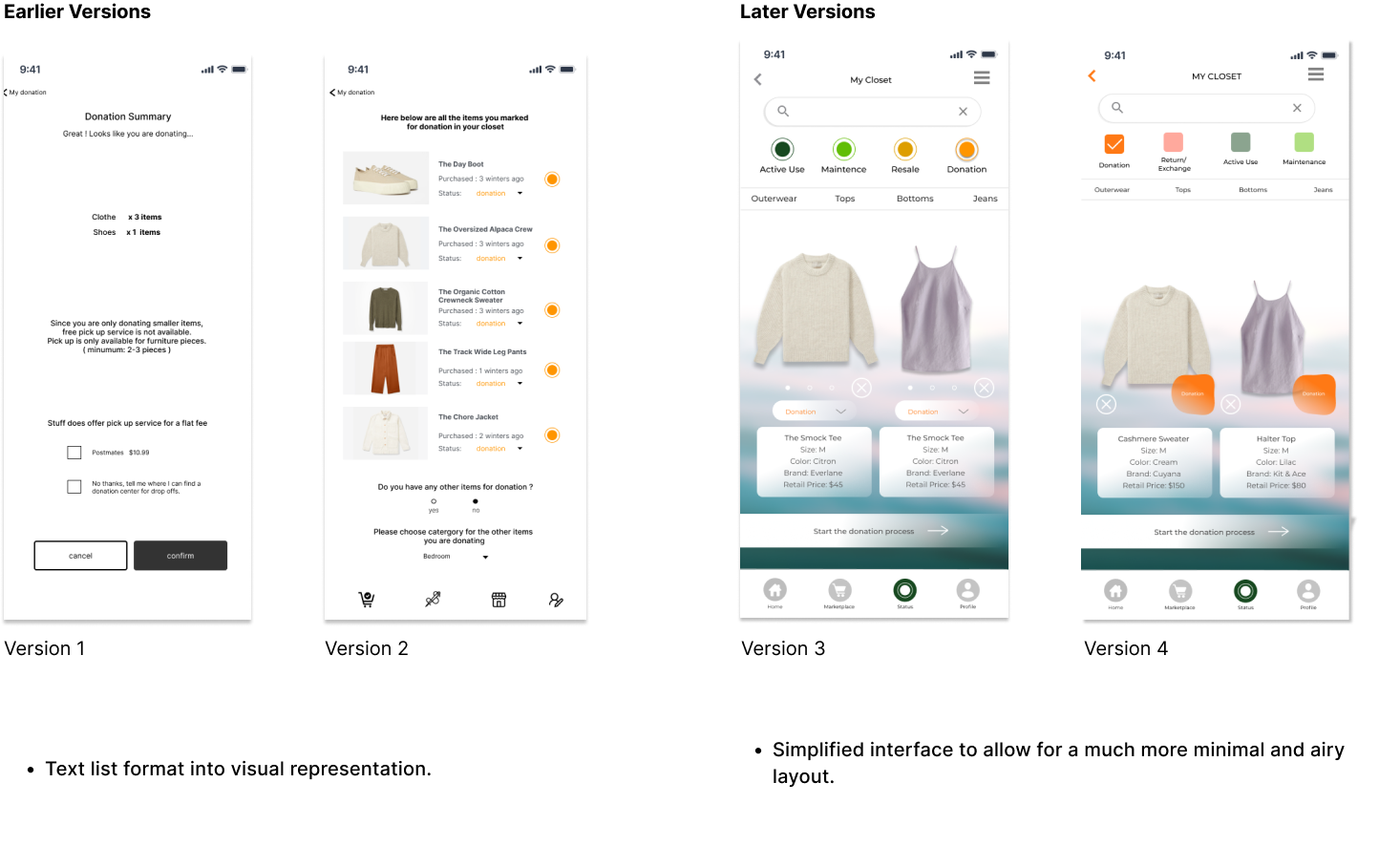 - I did 5 rounds of rapid prototypes, I used this feedback capture grid to capture all the user feedback. Most of the criticism were addressed in the last 2 slides, where I spoke about the wireframe revolutions.
- One of the most important takeaway from this is multiple users had asked me how would an item enter into the virtual closet, I had plan to address in the next iteration, but because so many people asked, it pushed me to brainstorming this a bit further.
- The dream product would come with in tandem with a web browser plug in, similar to how Pinterest works. It would work in tandem with the app. Anytime the user purchase an item on a browser, a pop up window would ask user if they would like it to be added to the virtual closet. Then the user can choose to tag the item through the browser or the app. 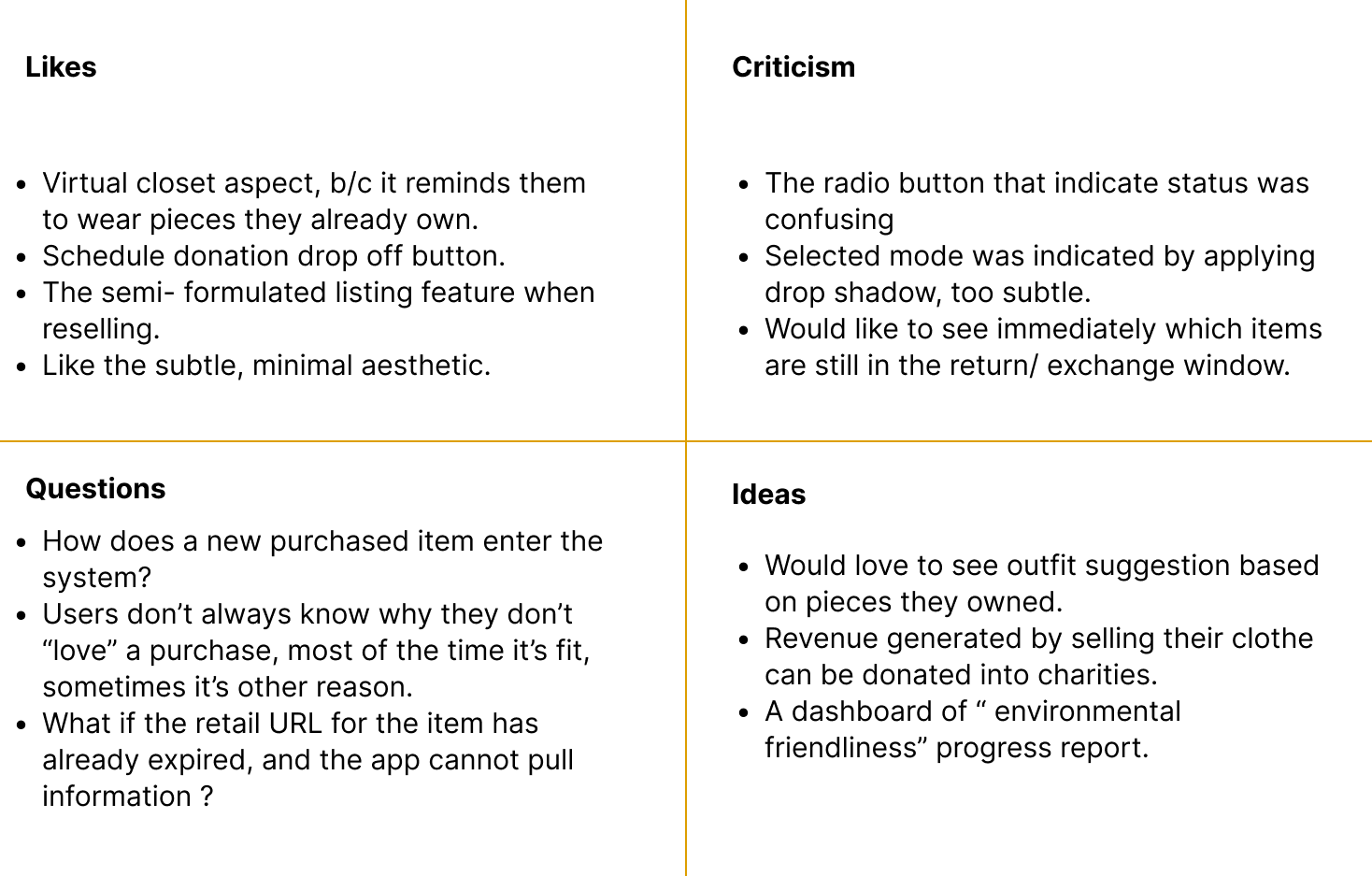 I conducted google polling survey, with participant of 8 participants. On a scale of 1-5, 1 being the lowest, 5 being the highest. I asked them to rate this app on a series on criteria like “ how easy was to perform maintenance” and perhaps the most important question of them all is “ how likely are you to use this app to manage your closet". The answer were all 4 and above. 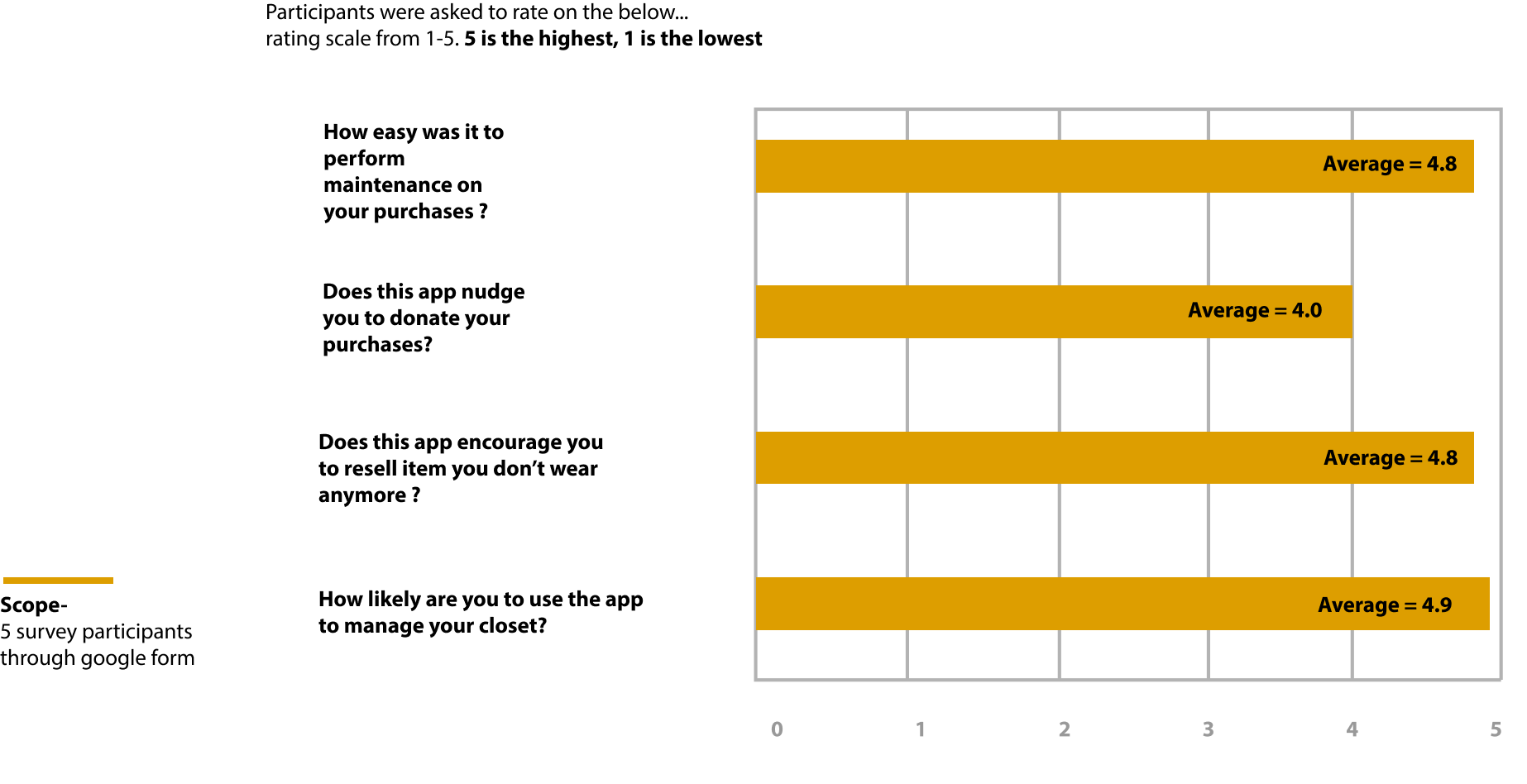 Fashion Forward
• Daily outfit generator based on weather.
• Suggest other user’s closet based on style and body measurement.

Incentivize
• Point system accruement, users can earn“ points” the more they perform any of the tasks.
• Allowing the earning from selling clothe to be available for donation to charity of choice.